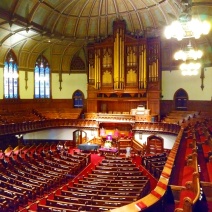 Fifth Avenue Presbyterian Church’s tower clock still runs on its original gravity-powered mechanism, installed in 1875. These gears transfer the power from the central mechanism to the hands on the clock’s three faces. It is a beautiful piece of machinery that has been carefully maintained for nearly 150 years.

Current building
Completed: 9 May 1875
Architect: Carl Pfeiffer
(Surprisingly, Fifth Avenue Presbyterian Church is not listed on either the National Register of Historic Places or as a New York City landmark.)

Fifth Avenue is in many ways New York’s Main Street.1 It divides the streets2 on Manhattan’s grid into east and west. It is lined with some of the city’s most recognizable landmarks: the Flatiron Building, the Empire State Building, the New York Public Library, Rockefeller Center, St. Patrick’s Cathedral, the Plaza Hotel, Central Park, the Metropolitan Museum of Art, and the Guggenheim, to name a few. The stretch in Midtown between the library, at 42nd Street, and the park, at 59th Street, runs through the heart of one of the most exclusive high-end shopping districts in the world.

And it is there, in the hustle and bustle and consumerism of Fifth Avenue, at the corner of West 55th Street, that you will find the stately calm of Fifth Avenue Presbyterian Church (FAPC). Back in 1873, when the congregation of what was then called Cedar Street Presbyterian Church bought a plot of land for their new building, this was far uptown; many people never expected the city to extend much past 59th Street.

I can’t say I’ve done much, if any, shopping on Fifth Avenue, but I have passed this church a number of times. Though the city has grown up around it and it is now dwarfed by Midtown’s skyscrapers, FAPC’s clock tower still reigns over the corner of Fifth Avenue and 55th Street. So when I saw that FAPC occasionally offers tours that take visitors up into the clock tower, I knew I needed to add it to my list.

The tour began in the Kirkland Chapel, a lovely, smaller chapel just inside the West 55th Street entrance, behind the main sanctuary. It was there that our tour guides, Gail and John Crane, were married over 50 years ago, and we all benefited from their personal connection to and intimate knowledge of FAPC and its history. The Kirkland Chapel was constructed in 1925, half a century after the main part of the church, and is constructed of pressed concrete, but the restrained Gothic detailing gives it a timeless feel.

From there our guides took us into the main sanctuary. As a Mormon, it reminded me a lot of the Tabernacle on Temple Square in Salt Lake City, with wooden pews on a sloping floor, a wraparound balcony and curved ceiling above, all dominated by a large organ3 over the pulpit. Mrs. Crane pointed out that the windows we could see from the sanctuary are not actually outside windows; the sanctuary was constructed with a double wall, which not only protects the stained glass from the elements but also keeps the sanctuary warmer in the winter and cooler in the summer. It also provides soundproofing, making the sanctuary remarkably quiet in spite of the traffic and noise of one of the busiest parts of New York City.

Mrs. Crane also noted that FAPC had a very early form of air conditioning. Wooden louvers used to be in place under the pews in the sanctuary. Large blocks of ice would be placed in the basement below, with fans blowing air across them. In the ceiling above, panels were opened, and the entire room became a sort of flue to pull warm air out and cool air in. (In fact, a modern air conditioning system wasn’t installed until 2003.) In winter, the church is heated with steam from Con Edison’s district steam system, the largest such system in the world.4

After spending some time admiring the Victorian Gothic architecture of the sanctuary, we were ready for the highlight of the tour: the attic above the sanctuary’s curved ceiling and the clock tower.5 We took an elevator to the third floor, then a short flight of stairs down to a door with a sign that read “Sanctuary attic — authorized personnel only”. I’ve always appreciated opportunities to go past signs like that.

The attic was a voluminous space that filled the length and width of the church. We walked in on a narrow wooden catwalk with metal rails painted a bright yellow. The church’s peaked roof rose overhead; directly in front of and below us on the catwalk was the other side of the sanctuary’s ornate stenciled ceiling, though painted gray and covered with the dust of nearly 150 years. The church’s director of facilities, Derek Maddalena, was excited to point out the history and 19th-century technological innovation contained even in this space rarely open to public view: the sanctuary’s old gas lamps, the winch system that allows him and his staff to lower the sanctuary’s newer electric lamps to replace the bulbs, the new masonry necessitated by a snowstorm earlier in this century.

Then each member of the tour group went one by one up a steep wooden staircase — almost more ladder than stairs — to an upper catwalk. This led to the front of the church and a doorway into the south tower. It opened into a large square room with bare brick walls nearly 60 centimeters (2 feet) thick. Three of the walls each had three narrow windows with pointed Gothic arches high off the floor; sunlight streamed in through one from over Fifth Avenue, illuminating dust flying in the air before splashing a puddle of sunlight on the plain wooden floor. A wooden staircase with a single landing went up two of the walls to the next floor above. A wooden framework hung from the ceiling in the middle of the room, which Mr. Maddalena explained was the pendulum of the tower clock. Along the room’s western wall, to the right as we walked in, was another framework that extended through the floor. This contained a bucket filled with rocks which served as the clock’s weights, like those on a grandfather clock. Mr. Maddalena explained that the clock had never been electrified and still ran using the same gravity-powered mechanism it had used since the church’s completion in 1875. The weights still had to be wound up once a week by the facilities staff.

We were then invited to ascend the stairway in the corner of the room to the next floor, where we saw the actual clock mechanism itself. It was housed in what almost looked like a little shack or cabin in the middle of the dark room near the very top of the tower, right behind the clock’s three faces. Mr. Maddalena even invited us into the little shack, two or three at a time (which was all it would hold), so we could see up close the 150-year-old timepiece that still runs the clock tower that reigns over Fifth Avenue. Nearly every piece of the mechanism, the director of facilities explained, is the original. This is something that Mr. Maddalena and his staff and their predecessors have faithfully cared for over nearly a century and a half. It is a remarkable instrument.

We were literally at the high point of our tour, and then it was time to go down. We returned the way we came: down the staircase in the corner, out of the tower and down the catwalk in the attic, down the ladder-stair one by one, and to the elevator. Back down to the ground level and eventually back out to the traffic and noise of Fifth Avenue.

It is almost impossible to visit a church and not have my eyes drawn heavenward. But in this case, I was literally taken heavenward up into a clock tower, and when I returned to the earth it was with a renewed appreciation for those whose faith and devotion have cared for this place for so long — a place that has remained virtually unchanged for a century and a half as a city has grown up around it, that has counted time for shoppers and workers on Fifth Avenue for nearly 150 years but has itself stood still, timeless and firm.

Fifth Avenue Presbyterian Church offers a tour every Sunday, after the 11.00am service most times of the year (this service takes place at 10.00am between Memorial Day and Labor Day). It also offers tours on Saturdays during Advent and Lent. For more information, check out the tours page on the church’s website.

Extended tours that take visitors to the attic and up the clock tower, like the one I went on, take place several times a year — once every month or so. See the calendar for specific dates and additional information.