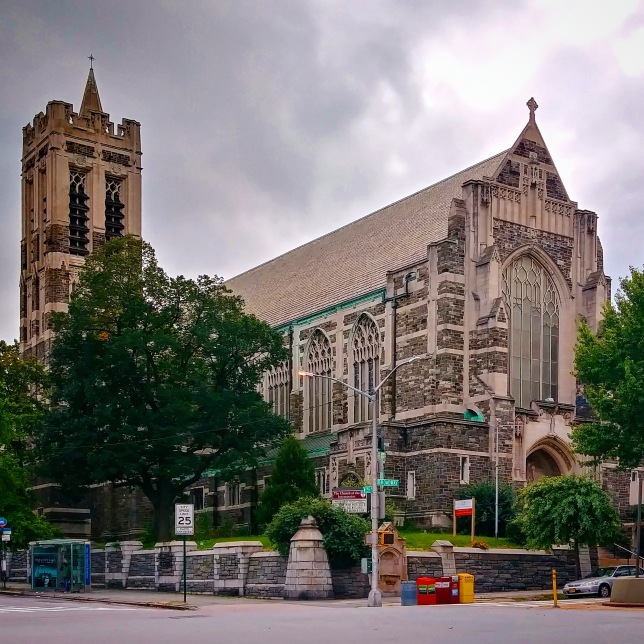 Exterior from the northwest corner of Broadway and West 155th Street. 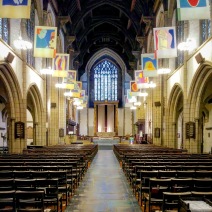 Timber ceiling with stenciling over the nave. 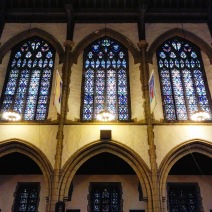 Arcade over the south aisle and with stained-glass windows in the clerestory above.

One of New York City’s best annual events doesn’t cost anything to attend: Open House New York Weekend, which takes place each fall. This year, over 300 sites across the five boroughs were open to the public, and among those were a number of houses of worship. It was a perfect opportunity to continue this project.

The first house of worship I visited was the Church of the Intercession, an Episcopal diocese in Hamilton Heights, Manhattan. The congregation was founded in 1846 while its current home was built between 1912 and 1915. Its designer was Bertram Goodhue, a prolific architect whose work includes two other churches I’ve visited for this project, St. Bartholomew’s Church and St. Thomas Church, as well as the Nebraska State Capitol and the Los Angeles Central Library. It was named a New York City Landmark in 1966 (Landmarks Preservation Commission designation report [PDF]) and placed on the National Register of Historic Places in 1980.