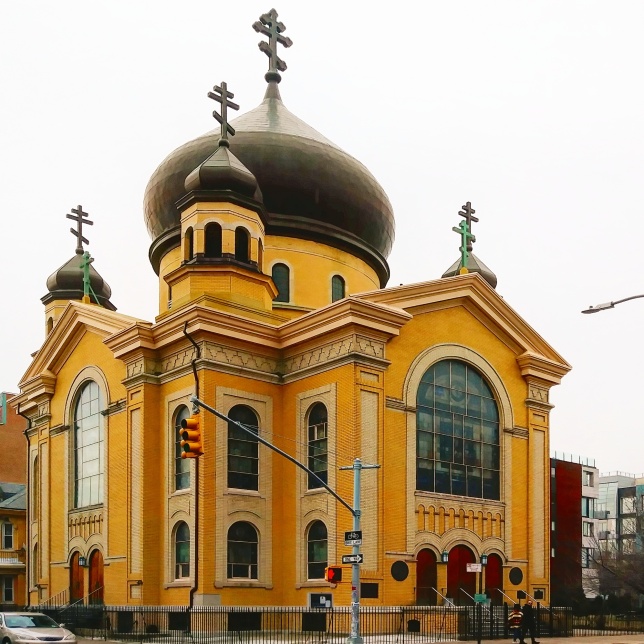 Exterior from the northwest corner of North 12th Street and Driggs Avenue. 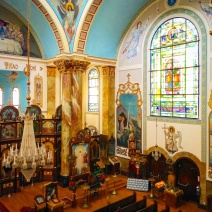 Interior. The Russian Orthodox Cathedral of the Transfiguration of Our Lord was built between 1916 and 1922. It was named a New York City landmark in 1969 and listed on the National Register of Historic Places in 1980. It was designed by Louis Allmendiger and is one of the few examples of Byzantine Revival architecture in the United States.

The warm interior is rich with religious imagery and iconography in vibrant colors and accents of gold. The thick scent of lighted candles fills the air.

The Cathedral of the Transfiguration of Our Lord is not only the first Russian Orthodox house of worship in this project but, as far as I can remember, the first Russian Orthodox church I’ve ever been inside. As I went in, two things struck me: the scent of burning candles, thick in the air, and the fact that I know so little about this faith and had no idea what I was looking at or what I should be looking for.

I started walking counterclockwise along the wall of the nave, trying to take it in and make some sense of what I was seeing, snapping photos along the way. It was a very colorful place, though it was a cloudy day and the colors were a bit subdued. My eyes were drawn up, as they always are in places of worship, toward the interior of the large onion dome over the cathedral, the most sure sign, with the three-barred Russian cross, that this is a Russian Orthodox church.

While I was in the Cathedral of the Transfiguration of Our Lord, the only other person I saw was a man hurrying back and forth, scurrying almost, from the east end of the nave (what I might call, perhaps erroneously, the “front” of the nave) to the lobby or narthex. He seemed to be cleaning up after that morning’s service. As I approached the low stage at the front of the nave, he turned to me and in a fairly thick eastern European accent told me I could take as many photos as I would like, but he would be closing up the church soon.

How opportune for me to come by this church on this day, at this time. The church’s website doesn’t list any opening hours or tours, so I was unsure if I would even be able to go inside, but the gate at the sidewalk was open and the front door was unlocked. More importantly, I finally had the opportunity to speak with a church member, just as I had hoped I would in this project. So we got to talking.

He pointed out the wall at the front of the nave which separates the nave from the sanctuary, where the actual altar is located, and introduced me to the term for this wall: iconostas or iconostasis (both forms are acceptable). He explained that only the priest may go through the main doors at the center of the iconostasis, but laymen may use one of the side doors; women are not allowed in the sanctuary. Fortunately for me, that meant I could go behind that wall, and he invited me to see the altar. He explained that only the priest could walk on the rug or carpeting leading from the center door to the altar itself, while laymen were obliged to walk around behind the altar, along the apsidal wall (another term I’ve learned in the course of these church visits). The parallel with the Holy of Holies in the tabernacle and temple described in the Old Testament was obvious.

As we returned to the back or west end of the nave and continued talking, I learned that the man’s name is Walter and he is from western Poland, though he has lived in the United States for 30 years. He said he no longer goes back to Poland very often, since his parents have passed away, and he has two children here, one of whom is off at college.

I asked Walter about Russian Orthodox worship. He said that it is very similar to a Catholic Mass — just longer, he added with a smile. What language is it in — English, or Russian, or both? English, he replied, as well as an old Slavic language — Church Slavonic, according to Wikipedia. I knew I could get a photo of the nave from a better angle from the choir loft. I wouldn’t have taken it on me by myself to go up there, but I asked Walter if it might be okay. He politely said, “Go! Go!” and shooed me over to the stairs. I took a few photos and then, cognizant that Walter planned to close the church soon, I decided it was time to get on my way. I went back downstairs and thanked my new friend. He led me down the front steps and opened the gate for me.

I returned to a fairly mild but wet and gray midwinter New York day, but the color and warmth inside a Russian Orthodox cathedral in Brooklyn lingered with me.

The cathedral’s website doesn’t list any official visiting hours or tours, and I gather that Russian Orthodox houses of worship are not open to the public as a matter of course. I just happened by shortly after a worship service had ended, and that may be the best time to visit. The worship schedule is available on the cathedral’s homepage.

One thought on “Week 6: The Russian Orthodox Cathedral of the Transfiguration of Our Lord”