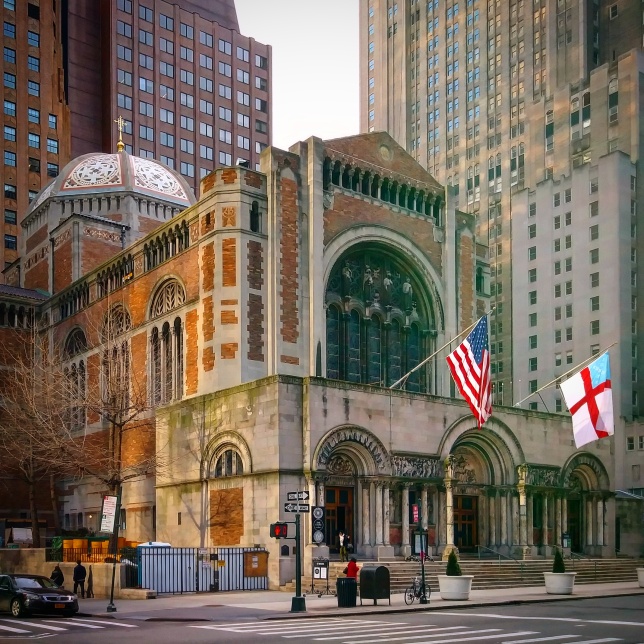 The exterior of the church from Park Avenue and East 51st Street. 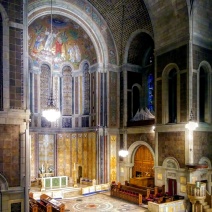 The apse and altar. The mosaic, designed by Hildreth Meiere, depicts the Transfiguration as recorded in the New Testament. The console for the organ — which, with 12,422 pipes, is the largest in New York City — is toward the lower right.

The complex woodwork and byzantine style of the dome’s interior is one of the church’s most beautiful features.

The Children’s Chapel was specifically designed for children, including the pews designed for smaller bodies. It has a wonderful warmth to it.

In a city full of Gothic religious, civic, academic, and even commercial architecture, St. Bartholomew’s is a welcome diversion. The Romanesque exterior was designed by Bertram Goodhue to harmonize with Stanford White’s portal, which was brought from St. Bart’s old building at Madison Avenue and East 44th Street near Grand Central, as were a number of interior furnishings. Inside, the Romanesque is complemented by Byzantine decor, including tile, mosaic, and carving, that reflects the modern art deco movement which was just beginning at the time of the new building’s completion.

The main sanctuary is a beautiful space. When you enter, take time to note the wood paneling and inlaid text — designed by the architect, who was also a typographer — and ornate carvings of a variety of animals at the west end (back) of the nave. This large wooden box encloses much of the pipe organ, which, with 12,422 pipes, is the largest in New York City. Then move to the transept crossing and look up. The interior’s Byzantine program reaches its zenith in the intricate beams that support the interior of the dome. If you have a moment, walk up the stairs to the balcony in the north transept. From there you can gain a greater sense of the scale of the 1,000-seat sanctuary as well as a great view of the apse and altar and the large circular window over the south transept.

One thing not to miss is the Children’s Chapel, located on the south side of the nave. This chapel was specially designed for children, down to the shorter pews made for smaller bodies and the capitals that depict Peter, Paul, and other biblical figures as children. This chapel has a wonderful warmth that makes you want to just stay for a while. If you have even more time, take a moment to visit the baptistry as well as a small, very intimate chapel which are both located just off the north transept. The baptistry contains some of the oldest furnishings and carvings in the church, which were brought from the old St. Bart’s, while the chapel contains one of the building’s newest artworks, an ornate Russian icon of Mary and Jesus that St. Bart’s obtained in 2000. (On the other hand, if you are short on time, you can skip the Memorial Chapel in the basement.)

St. Bartholomew’s offers tours of the building’s art and architecture each Sunday immediately following the 11.00am service. Tours start around 12.15pm in the northwest corner of the nave (just to the left right after you walk in).