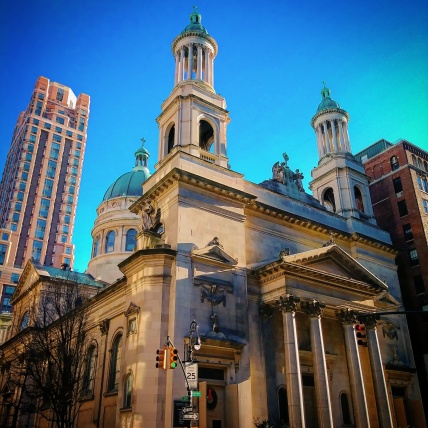 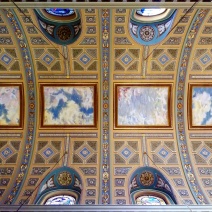 The barrel vault over the nave.

The dome of St. Jean Baptiste Roman Catholic Church on Manhattan’s Upper East Side rises above the transept. 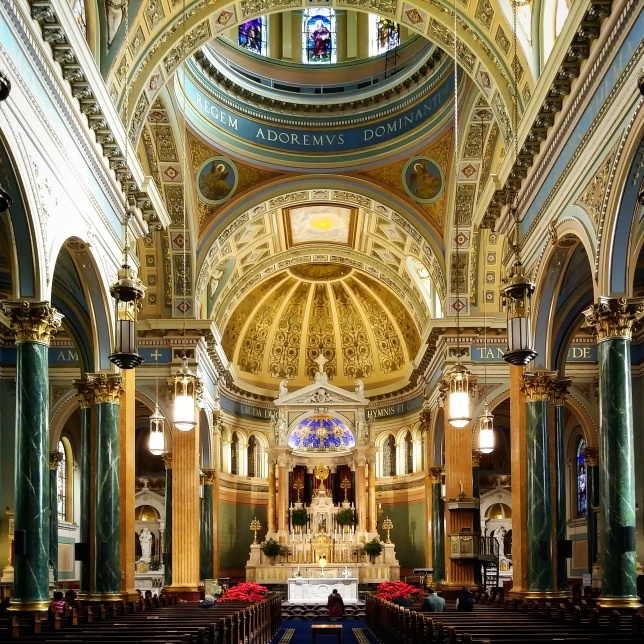 Looking east down the nave toward the apse and altars.

I have long had an affinity for Québec and French Canadians — ever since I went there with my middle-school French class — but I never knew what a prominent role they played in New York City history. In fact, according to the detailed, if somewhat difficult to follow, history on the church’s website, of the 90,000 people who lived in New York City in 1810, 10,000 spoke French. This community needed a church home to call its own, and after a number of churches and missions in a variety of settings — including at one point a rented hall above a stable — this church was built. It is named after Québec’s patron saint, John the Baptist, or, in French, St. Jean Baptiste.

I had passed this church a number of times on visits to the Upper East Side. Even in a neighborhood notable for its beautiful architecture and streets, this church stands out. Its two towers dominate the corner of Lexington Avenue and East 76th Street, its portico beckoning passersby to enter. Behind, a dome — an unusual feature for Catholic churches in New York City — arches over the cruciform roof of the church and points heavenward. Even a quick glance hints that this is a place set apart from the busy city around it.

But I had not expected the beauty that awaited me inside. As I passed through the doors into the narthex and then into the sanctuary, the beauty of the exterior was surpassed by an even more remarkable interior. The Italian Renaissance program is thorough and even lavish. Columns with the appearance of green marble — though I suspect they are scagliola, an imitation made with plaster, glue, and a lot of skill — line the nave. Together with rounded arches they form arcades that separate the aisles, which themselves are lined with intricately carved confessionals and the Stations of the Cross in mosaics. Above these, and in a clerestory above the columns and arches, are stained-glass windows. St. Jean Baptiste is one of only two churches in New York City — the other is St. Patrick’s Cathedral — whose stained glass was produced by the workshops at Chartres, France.

My eyes continued to be drawn both upward and forward. The clerestory gives way to a barrel vault over the nave, with coffers that culminate in panels painted to look like cloud-filled sky. These lead toward the dome, which rises above a gleaming white marble altar table. Beyond is the apex of the St. Jean Baptiste’s ornate decoration, the high altar. Both the altar itself as well as the apse in which it is set have half domes set with mosaics. The intersecting vaults, arches, and domes, all decorated with delicate gilded carvings, mosaics, and stained glass, are riveting, even dazzling. As I approached the altar, I found myself transfixed by the intricacy and beauty of layer upon layer of architecture — this was a place to stop and stand in awe. And that is just what I did.

The church’s website has extensive information on the parish’s and the building’s history. The Wikipedia article about the church has a fairly detailed description of its exterior and interior architecture and ornamentation as well as additional information about its history. The New York City Landmarks Preservation Commission’s designation report (PDF) — St. Jean Baptiste was one of the earliest New York City landmarks, receiving the designation in 1969 — is also worth a quick (it’s just one page) read.