On 16 March 2009, a new South Ferry subway station, the southernmost subway station in Manhattan, opened. The old South Ferry station, which originally opened over a century earlier in 1905, had served millions of commuters well, but it had always had its limitations. When the New York City Subway was originally built, local trains had only five cars, and so stations where only local trains stopped were built just long enough for five cars. This later proved insufficient, so local trains were extended, as were local stations — where possible. That’s the reason the beautiful original City Hall subway station was shuttered at the end of 1945, and it’s why the architecture and signage of some older subway stations abruptly changes partway along the platform.

The old South Ferry station, built as a loop where terminating downtown trains could turn around and return uptown — like the City Hall station — couldn’t be extended. But, unlike City Hall, it was too vital to close: there wasn’t an alternative station nearby, and it gave commuters a needed connection to the Staten Island Ferry. So it remained open, though only the first five cars of a ten-car train could platform.

But, as I mentioned, it was also a loop, and you know what happens when you align a ruler-straight subway car with a curved platform? It leaves large gaps between the platform and the train — gaps that really are big enough for someone to fall into. Mind the gap, indeed! So the old South Ferry station had mechanical platform extenders that filled the gap in front of each train car. But that also made service at the station slower, since arriving trains had to wait for the gap fillers to extend and departing trains had wait for them to retract.

(There was also an inner platform within the loop, but the curve was so tight that trains could open only their center doors. It proved so problematic that the inner platform was closed in 1977, though the tracks are still used, particularly by downtown 5 trains which terminate at Bowling Green on weekends and use this loop to turn around and return to the uptown track.)

So in 2009 a new, modern South Ferry station opened. It was a true terminus, with the tracks ending on either side of an island platform. In addition to making the station fully accessible, it also allowed more frequent service on the 1 train: MTA New York City Transit could decrease rush-hour headways from four minutes to as frequently as 2½ minutes — 24 trains per hour.

But then, a mere three and a half years later, the unthinkable happened. On 29 October 2012, hurricane Sandy made landfall in New Jersey and hit Lower Manhattan with a nearly two-meter (six-foot) storm surge which flooded streets, buildings, and tunnels, including subway tunnels and stations. Millions of liters of salt water filled and virtually destroyed the new South Ferry station and its sensitive, state-of-the-art electronics and other equipment.

Five months later, on 4 April 2013, the old South Ferry station was reopened to restore the 1 train’s vital connection to the Staten Island Ferry. The Metropolitan Transportation Authority, the New York state agency that operates the subway, had to figure out what to do about the old station, with repairs estimated at $600 million or more.

Now, four years later, the MTA’s Fix & Fortify repairs on the new South Ferry station are almost complete. Since the idea behind the repairs is to leave the transit system more resilient and able to weather future storms with less damage, once the old South Ferry station closes it may never open to the public again. So last Saturday, 18 March 2017, I took some time to visit the station and take in its early-20th-century details and design. Here are some photos and videos from my visit. 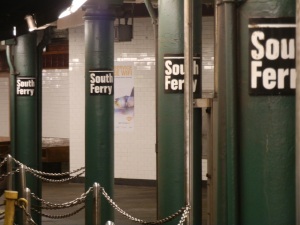 Station identification signs are mounted on cast-iron columns that line the platform. 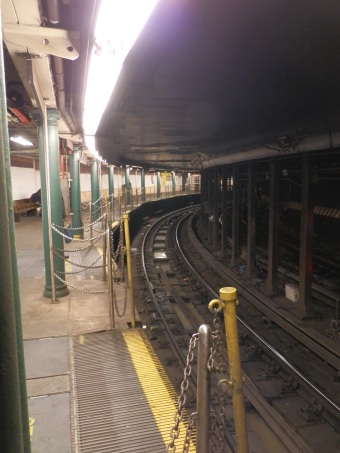 The curved outer tracks and platform of the original 1905 South Ferry station.

The curved outer track and platform of the loop station, which was designed to allow terminating downtown trains to return to the uptown track. 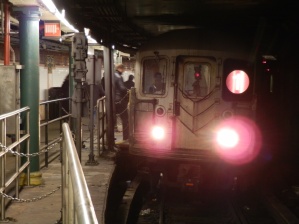 A 1 train takes on passengers as it waits to return to the uptown track.

A 1 train waits to return to the uptown track. Notice the gap fillers between the platform and the open train doors. 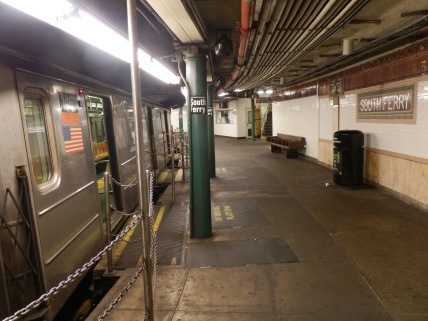 The station’s curved platform is one of the smallest in the New York City Subway system, with a floor area of only 1,560 square meters (16,800 square feet).

These signs remind train conductors, situated in the middle of the ten-car trains, to wait for gap fillers to extend and to open the doors of only the front five cars. 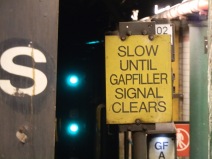 Train drivers must wait for gap fillers to retract and this signal to clear before proceeding out of the station.

A station identification sign mounted on a cast-iron column.

This video shows a train entering the station and gap fillers extending before the doors open.

In this video, the same train leaves the station. Notice the train pause while the driver waits for the gap filler signal to clear. Also notice how loudly the wheels scrape against the rails, despite the lubricant which is sprayed on the tracks to reduce friction.

The MTA plans to reopen the new South Ferry station in June 2017, after repairs that cost $344 million.