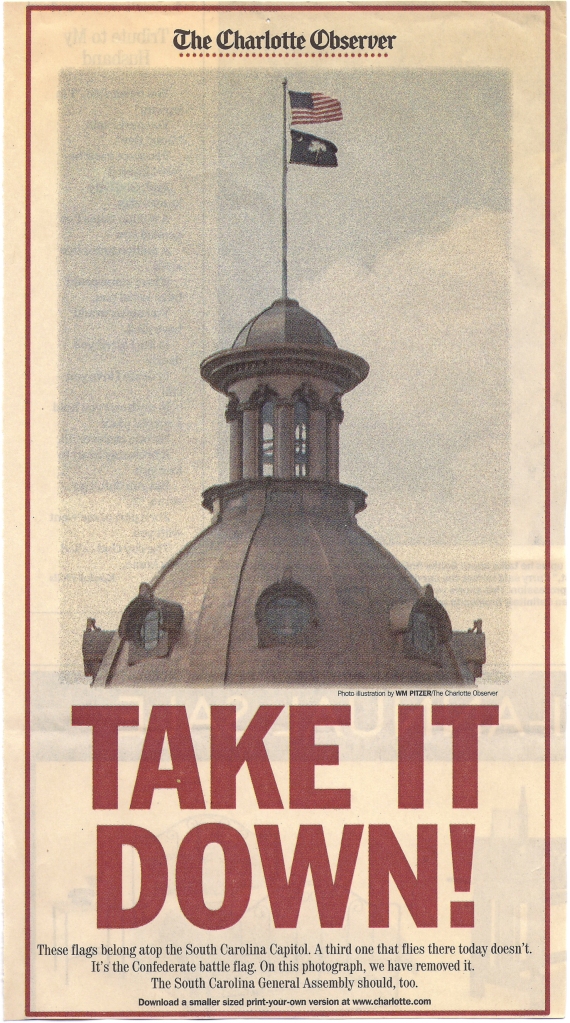 Back when I was growing up in North Carolina, our neighbors to the south flew the Confederate battle flag atop their state capitol. When I was in high school, there was increasing public pressure to remove it, with opponents of the flag arguing that it symbolizes racism, slavery, and hatred. The counterargument was always that it simply represented Southern heritage and honored ancestors who fought and died for what they believed in.

It didn’t take me long to figure out where I stood on the matter. I learned that the flag hadn’t flown over the state house since the Civil War but, rather, since the civil rights movement—1962, to be exact, ostensibly in remembrance of the centennial of the Civil War but clearly in protest of expanded rights for African Americans. And it was tough for me to “honor” people who had fought to defend a way of life that was entirely dependent upon the enslavement of their fellow human beings.

I felt then that the Confederate flag needed to come down. When The Charlotte Observer published this graphic on its opinion page in late 1999 or early 2000—my senior year of high school—I carefully cut it out and pinned it to the wall of my bedroom.

I finally took it down that summer, after the Confederate battle flag, too, came down from the state house on 1 July 2000. I still remember watching its removal live on TV. I placed this clipping in my journal and there it has remained.

But now the time has come to finish the job. A Confederate flag still flies on the grounds of the state house in Columbia, South Carolina, over a memorial to the state’s Confederate Civil War dead. In the wake of the tragic and racially-motivated shooting of nine people at Emanuel A.M.E. Church in Charleston—the Rev. Clementa C. Pinckney, Susie Jackson, the Rev. Sharonda Coleman-Singleton, the Rev. DePayne Middleton-Doctor, Ethel Lee Lance, the Rev. Daniel L. Simmons Sr., Cynthia Hurd, Tywanza Sanders, and Myra Thompson—and, really, even before, the use and display of the Confederate flag is indefensible.

It’s time to take it down, and it’s time for South Carolina’s political leaders to have the backbone to do it.