NYC Ferry’s summer 2018 schedules go into effect Monday 21 May. The system, which celebrated its one-year anniversary this month, was already operating at its highest levels since the current four-route system was launched in August 2017. Yet the new timetables represent another significant expansion of service.

Weekend service has doubled on the Astoria (AST), Rockaway (RW), and South Brooklyn (SB) routes. On the spring 2018 timetables each route had 31 one-way journeys each weekend day. Thanks to the new schedules AST has 64 one-way journeys each Saturday and Sunday while RW has 63 and SB has 60; in fact, RW and SB now have more service on weekends than on weekdays.

Weekend service has also increased on the East River (ER) route, albeit more modestly: it moves from 51 to 61 one-way journeys each weekend day.

Across the system, weekend service has increased 72%, from 144 to 248 total weekend journeys.

While the significant increase in service on RW should hopefully alleviate some of the overcrowding that plagued the service last summer, one other feature of the new timetables should help: super express service between Pier 11/Wall Street and Rockaway that skips the stop at the Brooklyn Army Terminal in Sunset Park. The new super express ferries will run throughout the day every day of the week.

How much time will passengers on these new skip-stop journeys save? It turns out, none, at least according to the schedule. On weekdays, inbound weekday journey times are 53 minutes while outbound trips take 54 minutes. On weekends 1 hour exactly in each direction is scheduled (except for the 15.15 inbound departure from Rockaway, which is scheduled to arrive at Pier 11 at 16.13 — just 58 minutes, and that one does stop at Sunset Park).

But what about passengers who actually do need to go to Sunset Park from Pier 11? Local service on SB generally makes up for the outbound weekday RW journeys that skip the Brooklyn Army Terminal. On weekdays, passengers going to Sunset Park can take SB ferries that leave Pier 11 at 6.43, 8.43, 12.43, 15.43, 16.43, and 17.43 instead of the RW ferries leaving two minutes later that will skip Sunset Park.

Another change regular SB passengers should be aware of is that all weekday journeys on the route have been shifted ahead 2 minutes: journeys that left at :15, :30, and :45 past the hour, for example, now leave at :13, :28, and :43 past the hour. If it left on the hour, it now leaves 2 minutes before the hour: the 7.00am departure from Bay Ridge now leaves at 6.58am. This holds true for all stops on all trips in both directions. (Because of the significant increase in weekend service on this route, the shift is less noticeable on Saturdays and Sundays.)

The summer 2018 schedules mark the return of NYC Ferry service to Governors Island. Boats on the ER and SB routes will make stops at Governors Island, providing ferry service to the island from Brooklyn and Queens in addition to Manhattan. Only boats operating during the island’s open hours will stop there, however, and only on Saturdays and Sundays.

For ferry service to Governors Island on weekdays, take the Governors Island ferry from the Battery Maritime Terminal, which is at 10 South Street, just east of the Staten Island Ferry’s Whitehall Terminal in Manhattan. These ferries are free for IDNYC cardholders and $3 roundtrip for everyone else. (These ferries also provide service on weekends from both Manhattan and Brooklyn.)

Service frequencies in minutes for each route on the summer 2018 schedules: 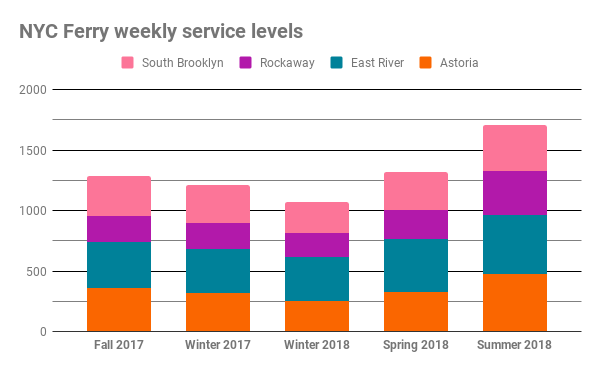 Here are all the data on service levels for the NYC Ferry’s summer 2018 schedules.

One thought on “NYC Ferry ramps up service for summer”