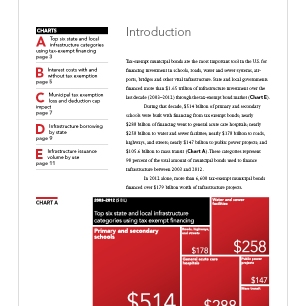 Charts for latest report | Charts for past reports
Metro areas generate nearly 90% of the nation’s gross domestic product, so if we want our economy to grow and remain globally competitive, we need to invest in urban areas. That’s the message of the Metro Economies Reports, an ongoing series produced by The United States Conference of Mayors’ (USCM) Council on Metro Economies and the New American City. Since 2007, I’ve worked with USCM to produce this series of charts that highlights important data from the reports, particularly the state of the nation’s top metro economies and the growth of U.S. gross metropolitan product, or GMP.

View this document on Scribd

Charts for past reports

In February 2013, The United States Conference of Mayors issued a special report in conjunction with the National Association of Counties and the National League of Cities on the impact revoking tax exemption would have on the municipal bond market. I designed the interior pages of this report as well as an accompanying series of charts.

Original content on this page is copyright © Dustin Tyler Joyce or its respective copyright owner and should not be copied. Learn more »