Following up on yesterday’s post, this morning, when few others were taking the survey so the server was fast enough so as not to be aggravating, I took the complete, 140-question version of Joshua Katz’s Dialect Quiz and Survey. And I am just as surprised by today’s result as I was by yesterday’s. Apparently I speak most like people in …

Hey, at least this is a city I’ve actually been to. (Also mostly just to check off the capitol, as was the case with Lansing.)

But my results are completely different from yesterday: 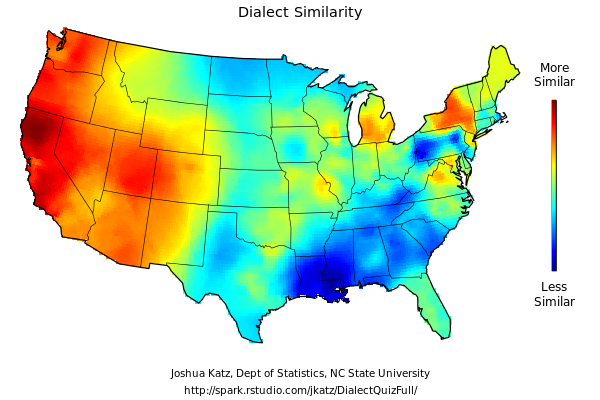 Most similar cities (all in California)

Least similar cities (all but one in the South)

At first glance, I apparently totally talk like I’m from California, and not at all like I’m from the South. The map even has a field of “less-similar” blue stretching across the crook in North Carolina’s southern border where Charlotte, the city I consider my hometown, is found. My initial thought was remembering that, yes, I did consciously work as I was growing up not to develop a Southern accent. Nonetheless, I still thought I said some things like a North Carolinian.

But look a little closer. Yesterday, in my results to the shorter, 25-question version, the difference between my most similar city, Flint, Michigan, and my least similar city, Plymouth, Massachusetts, was pretty stark: there was an estimated 31.5% chance that a resident of Flint would respond the same way I did, whereas a resident of Plymouth was half as likely, 16.2%, to do so.

Today, the difference between my most similar city, Sacramento, and my least similar, Baton Rouge, is not nearly so stark: 52.7% versus 47.7%, respectively, a difference of a mere 5 percentage points.

Now, I’m not an expert on what these results mean, but here’s a guess: they reflect my across-the-country upbringing, and my adulthood in three different, very distinct cities, as well as my tendency to listen to language, to focus on the way people speak, and then adopt what I like the most into my own speech. I used to call a shopping cart a “buggy”, and I used to use double modals (my favorite was “might ought”). I continue to pay attention to and refine the way I speak, so give me a few years and this same survey may give me yet another, even more balanced result.

By the way, these results also reflect an incorrect answer I gave: I clicked on “traffic circus” and clicked “submit”, and then realized too late that I have never called one of those things a “traffic circus”. I was going for “traffic circle”.